It’s often said that you should never go for the cheapest option when buying automotive equipment. This is certainly the case with car jack stands. You’re going to be putting a lot of faith in that little tool, so you should only use the best car jack stand you can find.

What is a car jack stand?

A car jack stand is a compact device which is capable of supporting immense weight for extended periods of time. Once a jack has been used to raise a car from the ground, two or more jack stands are placed beneath the vehicle to ensure it remains stationary. Mechanics and DIYers alike will use car jack stands when carrying out repairs and inspections of a car’s undercarriage.

But can’t I just use a car jack?

If you can’t find room in your budget for a pair of car jack stands (I know your struggle), you may be tempted to use your car jack as a replacement. This is a terrible idea.

While a car jack is built to raise a car off of the ground, very few are designed to hold that amount of weight for long stretches of time. People have died due to their decision to use a car jack over car jack stands. Many have been crushed to death after the jack caved in under the weight of their vehicle.

Whether you have to buy them or borrow them, car jack stands are absolutely essential when lifting a car from the ground and keeping in place safely.

How to use a car jack stand

While people have died from using a car jack instead of a pair of car jack stands, hundreds of would-be mechanics have met similar ends due to improper use of appropriate car jack stands. Seemingly insignificant mistakes, such as incorrect placement of the stands can result in them giving way, causing the car to come crashing down on top of you. Thankfully, car jack stands don’t take a whole lot of effort to master and injuries can be easily avoided if you follow a few simple steps.

Prior to the actual utilization of the car jack stands, several things need to be done. Your car should be placed in park at ground level, with wheel chocks steadying the wheels which are not being lifted. Once you’ve done that, you can use a car jack to raise your car. I won’t get too much into using a car jack, but this video tutorial should help.

Once your car has been lifted to a suitable height, you can begin the addition of your car jack stands. Although most cars are raised using a single car jack, you must always use two car jack stands for added safety. Relying on only one car jack stand to hold the weight of your car as you work beneath it is asking for trouble.

Once you have followed all of these steps, you can roll up your sleeves and begin whatever work needs to be carried out on your vehicle. However, be sure to double check the sturdiness of your jack stands before venturing underneath your car. It’s also advisable to pause once or twice while you work and inspect the jack stands to make sure they are holding up okay.

Before you start researching specific models of car jack stands, it’s a good idea to set yourself a budget. You’re most likely going to end up deviating from it a little bit, but at least it will give you some sort of idea as to which car jack stands you should devote the majority of your attention to.

Car jack stand prices vary quite a bit, with some entering the hundreds, while others don’t even break $50. Now, you definitely don’t want the mostly cheaply made car jack stands you can find, but there are some seriously impressive heavy-duty models which have been known to sell for as little as $20.

Unless you are a professional or plan to be constantly working on your car’s undercarriage, there really isn’t any need to spend hundreds of dollars on car jack stands. A one-off payment of $70 or thereabouts will get you a sturdy, trustworthy pair of car jack stands that will endure years of automobile raising.

This ESCO Car Jack Stand has proven to be a popular choice among professionals and dedicated automotive enthusiasts. It is designed for frequent and demanding work, so you should definitely put it in your maybe pile if you need a car jack stand for regular use.

If you’re looking for an affordable heavy-duty car jack stand, Performance Tool may be your best bet. The Performance Tool Car Jack Stand can be used to hoist cars, and even trucks, from the ground and will hold them aloft for however long it takes you to complete your work.

A pair of Hein-Werner HW93506 Jack Stands will set you back a bit, but for your money, you get a set of incredibly powerful stands with a capacity of up to 6 tons.

The Larin JS-6 Jack Stand is a popular choice among professionals and amateurs alike. It has the ability to support a wide array of vehicles and can be used multiple times a day without wear and tear. Likewise, it can be left in the corner of your garage for years and still promise a great performance when the time comes to use it.

If you were intrigued by the idea of a jack stand with a pin locking system rather than a traditional ratchet bar design, you’re going to want to check out the Torin Aluminum Jack Stand.

Each of the aforementioned products has a legitimate claim to the title of Best Car Jack Stand. However, it is my suggestion that you go with the Hein-Werner HW93506 Jack Stand, regardless of where you fall on the novice-professional spectrum.

A pair of Hein-Werner HW93506 Jack Stands can support literally tons of weight for hours on end, giving you plenty of time to carry out whatever complicated repairs your vehicle might require.

Although this stand is not manufactured in America, it is made with the same dedication and attention to detail which turned the United States into the Mecca of automotive equipment.

Enter your email address below to subscribe to our newsletter 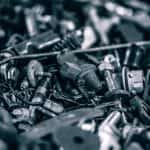